Thanks to the following folk on Twitter for interaction on this subject which prompted me to blog: Jonny Garrett, Adrian Tierney Jones, Ash Corbett-Collins, John Porter, Points of Brew.

It may be that I can start drinking Magic Rock again.

Back in the far, heady days of March 2019 I wrote a piece about the investment in Magic Rock / the entry of Magic Rock into Tesco and how independence, idealism and integrity aren't enough to keep a brewery afloat. It is still as of today the most-read screed on this blog.

I didn't note it at the time, but it seems more folk were up in arms about Magic Rock becoming available in the hated behemoth of Tesco than they were about the fact that the new sugar daddies had some very dubious connections in Myanmar. I was personal witness to one patron turning down the Cannonball Run in the late lamented Bubs at the time, so disgusted was he that a beer could possibly be made available in a mainstream outlet.

Then, last summer, I wrote a little piece about how best to deal with beer brands that may be troublesome for a whole host of reasons.

As well as trying to boost my back catalogue's numbers, this all provides some context for today's somewhat surprising but at the same time not surprising news. As reported in the Grocer, Magic Rock and FourPure's owner, Lion World Beverages, are seeking to sell the brands.

Coming hot on the heels of the news of London Fields' sale by Carlsberg Marston's, it seems to indicate that a pub tie - such as Brixton has through Heineken - is a vital part of ensuring a craft brand's post-acquisition survival. Carlsberg Marston's already has a huge traditional cask estate as well as Brooklyn to fill its pumps. There's just not enough room, especially at the moment, for anything else.

This is illustrated by the naked fact that in a calendar/financial year in which British pubs were closed for up to four months and when apparently drinking was way up , FourPure couldn't capitalise. As the Grocer reports, "sales of Fourpure’s biggest seller, Hemisphere Session IPA, fell from £1.7m to £960k over the 52 weeks to 11 Sep 21 – a 43% drop, on volumes down 48.3%." 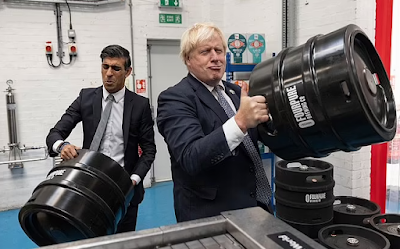 Coincidentally a month later noted pisshead Boris Johnson and noted teetotallar Rishi Sunak posed with some suspiciously luggable FourPure kegs in a post-Budget photoshoot, mugging off to camera in a desperate attempt to be shown to be supporting British business (seemingly oblivious to its Australian ownership).
Ironically this seems to have been the one time during the pandemic that booze wasn't being smuggled into Downing Street in a suitcase.
This was against the background of a much heralded rebrand of FourPure which, despite the puffery, merely turned it into yet another BrewDogalike. BrewDog should not be a model for anything, let's face it. Moreover, it also involved some questionable comments about other brewers' products/naming conventions which, literally and figuratively, left a bad taste in the mouth.
Of course, craft beer pushed back marvellously.

Ok, we swear we're not just being silly here.

If any other breweries want to get together for a collab, and release *Electric* Disco Forklift Truck, we're game and open to discussion on what the concept could be. Let us know if you're interested - the more the merrier! pic.twitter.com/bgEfQBANkW

As a result, FourPure's emperor's new clothes act has gotten them precisely nowhere. The bastardisation of a once interesting brand will, short of another expensive project by any new owners, leave it as yet another anonymous and unremarkable shelf-filler for Tesco.
Magic Rock may have a fighting chance of coming out of this better. Its old detractors may welcome it back into their lives if it is to become independent again. It will finally cast off any links at all to human rights abuses. It has kept its branding and has big guns - or cannonballs - in its beer lineup to call on should it wish to make a big splash in any relaunch.
But one final thought for Messrs Johnson and Sunak, and for all the others hawking Britain to the world. This was international investment into two strong British independent craft beer brands that has failed, and failed miserably. Whether it's the constraints of the beer tie, or Brexit, or ignorance/over-optimism on Lion's part, it sends out a rather dangerous message to future folk looking to invest in "Global Britain", post-Brexit. For whatever reason, it can go horribly wrong, and quickly.
What does that mean for future opportunities for craft beer to grow in this country? Where will the money come from? Who will take the risk? It remains to be seen what will happen with these two cast-offs, let alone any of the other up and comers.
For now, on a personal level, if all goes well I am looking forward to trying Magic Rock Highwire once again, safe in the knowledge that my hard-earned pounds won't end up in Burmese bullets.
No comments:

Email ThisBlogThis!Share to TwitterShare to FacebookShare to Pinterest
Older Posts Home
Subscribe to: Posts (Atom)
Hi, I'm Michael and welcome to Bring on the Beer, an organic, ongoing, sometime stumbling but always amateur adventure through the world of beer. I am seriously Scandiphilic and weirdly Welsh. I am an imperfect introverted imbiber, a blundering beer blogger, a tiresome tweeter and a randomly reclusive reflector. I write about my own personal experiences and interactions with everyone's favourite brewed beverage, trying to stay positive but unafraid to engage with more challenging aspects of the hobby. I hope you enjoy your visit.